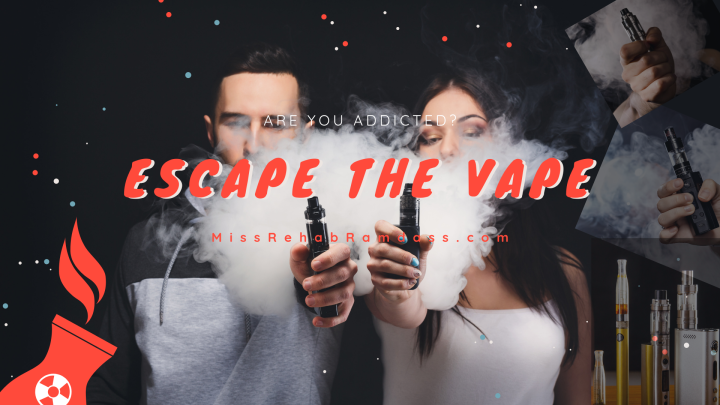 We have all heard of the latest new craze…vaping. You can’t walk down a NYC street without seeing multiple people smoking an Electronical cigarette aka Vaping. Various people that I personally know started utilizing e-cigarettes as a healthy alternative to actual cigarettes. Inhaling a substance to then release smoke has become this generations it thing to do. Marketers are targeting the youth with flavors like fruity pebbles, genius marketing and sleek designs. We are constantly being bombarded with messages left and right influencing the masses to use this modern, cool looking technology.  From famous people using them, to music artists advertising them in their music videos. What is vaping anyways? It is the inhaling of vapor that is created by an electronic vaping device. They are battery powered and have a cartridge filled with a liquid that normally contains flavorings, chemicals and nicotine. When you inhale from the device the liquid gets heated into a vapor which the person then inhales.

JUUL labs is the leading company selling vapes. There are so many options and price points on the market. From disposable E-Cigs, to really good looking vape mods to top shelf E-liquids. You can walk into a deli with less than $10 and there’s still an option for you. They even have vape starter kits, so crazy!!!

Electronic cigarettes were first invented in the 1930’s and has a long history of different people making different versions of the device. In 2006 and 2007 they were introduced to Europe and the United states. In 2008 The world Health Organization (WHO) announced that they do not consider E-cigarettes to be a legitimate aid to stop smoking real cigarettes and demanded that marketers remove from their materials that “WHO” considers these devices safe and effective. The FDCA (Federal food, drug & cosmetic of art) considers E-Cigarettes as both a drug and a device. In 2009 the FDA did some testing and two months later they issued a press release discouraging the use of electronic cigarettes. The FDA stated their concerns that E-cigarettes are targeted to young people, lack appropriate health warnings and they contain carcinogens (Cancer causing agent) and toxic chemicals.

There are so many similarities here to the Tobacco regulations. It sounds like history is repeating itself with E-cigarettes bringing in a new generation of nicotine addiction. Its actually no surprise because the same people who own these Tobacco companies have majority stake in vape products. Similarly, to Tobacco the regulations started the same. Restriction of sale to minors, ban of vaping in public places, restrictions on ads and online selling. Compliance with regulations would take several years but then would become acceptable to the public.  Marketers are so genius that even despite all of the facts around the potential harm of the product they draw you in with creative slogans and extend the truth to make the health benefits outweigh the true harm of the product. The key factor in this product is addiction & chemicals with unknown side effects. What they have done is target younger users which makes it the cool thing to do. With many states not having regulations access becomes unlimited. Young users turn into old users which would ensure future sales.

Marketing by popularity has been the campaign that has been over and over used by cigarette companies. From having spokespersons from medical professions to musical artists to movie stars etc.. No difference now except you layer in social media and the whole influencer era and you have the most powerful tool ever in the marketing world.

Yes, there are vapes that have no nicotine and are “better than others” because it removes the sense of addiction. However, there are still chemicals that bring uncertain health risks. There are no long-term studies on E-Cigarettes and its possible side effects that the people using this today are guinea pigs for us to then know what those side effects look like. We’re starting to find out a lot sooner than anticipated.

As of recent we have all heard of the tragic news. According to the NY times Medical experts and federal health officials are warning the public about the dangers of vaping and discourages the use of these devices as the number of people with a severe lung illness linked to vaping more than doubled to 450 possible cases in 33 states and the number of deaths is now FIVE!!

While this investigation is on going people should consider NOT using E-Cigarette products. Says Dr. Dana Meaney-Delman who is leading the CDC’s investigation.

There is a chemical involved as the cause of what is happening but they have yet to identify a specific device, product or substance. The NY times states that Dr. Christiani from The New England Editorial states that E-Cigarette fluids contain at least six groups of potentially toxic compounds. He also noted that many patients have also vaped substances extracted from marijuana or hemp. The mixing of the toxic chemicals and marijuana might even be creating new toxins!

I have asked several people that vape if they are addicted and their response has been no. Now there are people dying, the reason is unknown and the same people who are “not addicted” are still vaping. Interesting?!

Hookah’s have clearly paved the way to casual smoking and short brief highs. I mean is a brief high worth your health and your LIFE?! Just recently someone asked me why I don’t do hookah or vapes and my response was simple. I only inhale oxygen, anything outside of that doesn’t belong in my lungs.

Don’t be fooled by the latest new trend. The choice is yours to make and you should have a better understanding of what you are consuming and or inhaling. You have full control, don’t puff your life away for the temporary pleasures of the world.